Home > Blog > Social Media > Why Facebook is testing a ‘split’ news feed, and why brands should pay attention

Why Facebook is testing a ‘split’ news feed, and why brands should pay attention

Facebook recently announced a major experiment to the news feed that displays content posted to the social network, piloting the idea of splitting that news feed into two. The experiment has effectively created a ‘two class’ system for content, with posts from the pages that users have ‘liked’ thrown into a separate tab (called ‘Explore’), while updates from friends and family remain on your primary news feed. 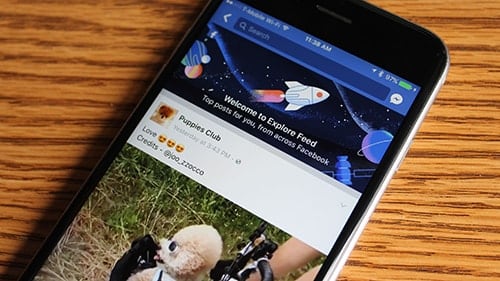 Facebook has been spotted experimenting with a different style of ‘news feed’ in some smaller markets, namely Sri Lanka, Slovakia, Serbia, Bolivia, Guatemala and Cambodia. As part of this experiment, content that has been posted to pages (such as brand or publisher pages) has been removed from the main news feed, and instead put into a separate ‘Explore’ tab. Content posted by friends and family remains prominent in the traditional news feed.

So why does that matter?

Facebook is a big driver of traffic, especially for publishers. The social network and Google combine for around 80% of news traffic, so any change that potentially harms the traffic that those sites experience is going to create some concern amongst publishers and brands.

Slovakian journalist Filip Struharik documented the impact, writing that publishers in his country were seeing just a quarter of the interactions they used to get before the change, and that traffic has dropped between 60 and 80% in the affected markets – that’s a big drop and it has unsurprisingly worried a lot of brands and publishers that rely heavily on Facebook to drive traffic and to engage with audiences.

And also unsurprisingly, brands and publishers can get around the issue of being ‘demoted’ to a secondary explore feed by paying to promote their content. That development has naturally led people to certain conclusions on Facebook’s motive for this experiment.

Facebook has moved to downplay this experiment with Facebook’s VP of News Feed, Adam Mosseri, bluntly claiming that the social network “have no plans to roll this test out further.” Of course, that isn’t necessarily a long-term commitment, and if these experiments win favour with users, it’s likely that they will be rolled out to bigger markets.

So what do I need to look out for?

Facebook has been tweaking its content algorithms for some time, as it tries to find the right balance between ensuring a good user experience for users, managing the huge and growing volumes of content posted to the platform, and ensuring that it meets its own commercial targets. This latest experiment is seemingly the latest attempt to find that optimal balance.

Those tweaks have seen organic content reach plummet for branded content, with estimates putting the figure at just 2% in 2016. That is only likely to get worse in a ‘dual feed’ Facebook world.

It means that brands may need to rethink their approach to Facebook, and be more selective about the types of content that they create and promote via the platform. Some brands will, presumably, absorb the distribution cost under the guise of brand awareness, but others will understandably start to question whether or not they are getting a return from social media.

For those for whom social media is very much within their remit, that could mean some difficult discussions with the C-suite regarding social media investment.

It wouldn’t hurt to start thinking about how you’re going to tackle the issue of reduced reach of your content now. Even if Facebook doesn’t push ahead with this dual feed system, the direction of travel is very much about promoting personal content at the expense of branded content. Branded content, in Facebook’s eyes, may have its value, but is that a value that brands are able and willing to pay for?