Home > Blog > Social Media > Can Facebook finally get it right with search advertising?

Can Facebook finally get it right with search advertising?

Facebook is dipping its toe back into the world of search marketing. But can the social network put right the wrongs of its previous attempts to master search?

So what’s going on?

Facebook has started trialling a new search advertising model, which it hopes will help it to turn around its declining ad revenue growth and compete with the likes of established competitors such as Google, as well as new players in the search advertising space, such as Amazon.

The social network is testing a new search advertising concept with a small number of advertisers in the automotive, ecommerce and retail sectors in the US and Canada, and will see advertisers inserting news feed ads into the search function of the site.

Facebook is being quiet on the specific details of how the model works, but it would seem that the model allows brands to insert their promoted news feed ads around selected search terms. Facebook has however pointed out that sponsored search results are made clear to the end user.

Haven’t we been here before?

We have indeed been here before. Facebook confirmed that it was trialling search ads back in 2012 but it turned out to be a very short-lived experiment, ending rather quietly the following year. 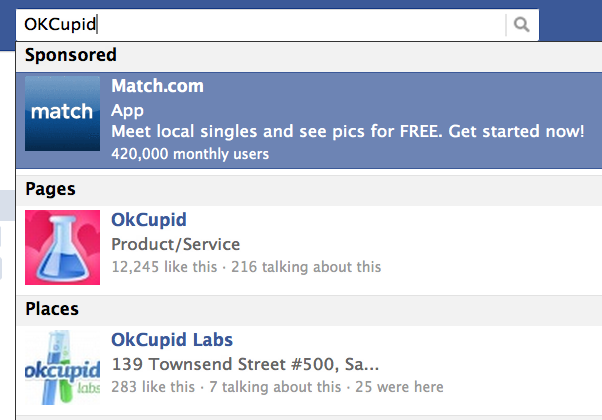 That model allowed brands to serve sponsored search listings for their Facebook apps so, for example, a user looking for a dating brand may be served an ad for a competing brand’s app.

The ads allowed brands to promote their respective Facebook pages but advertisers couldn’t direct users to their own websites or any other pages away from Facebook. That, combined a general decline in the use of applications across Facebook and the lack of practical applications for the ad model when it came to commercial search, meant that it was an uphill battle for the concept to prove successful.

The big question that Facebook really needs to find an answer to is whether Facebook is actually seem as a meaningful commercial search platform. Whilst brand search is generally well established on Facebook, it is the intent of those searches that is important.

The question of whether search advertising is worthwhile on a platform such as Facebook will ultimately come down to how brands measure that success. If their approach is to use social search for content discovery and brand building, then there are potential benefits from paying to be visible in those search terms. If the intention is easily attributable revenue then, even though 78% of American consumers have discovered retail products to buy on Facebook, according to Kleiner Perkins, the benefits seem less obvious.

That said, Facebook’s advertising models do have a lot in their favour. The ROI of Facebook ads compares favourably to competing digital platforms, and click-through rates appear to be on the increase.

Why does this matter?

For Facebook, this matters because it needs to grow its advertising revenues to appease Wall Street, yet it is facing increased competition from new advertising platforms such as Amazon, as well as competing social networks. The platform has become increasingly reliant on Instagram for ad revenue in recent years, and it wants to reduce this and kick-start growth in Facebook’s own ad products.

For marketers, it’s very early to say whether this development would have any real influence on a brand’s search marketing strategy, given that the search market for Facebook is very different to the market on more established search platforms. Whilst on the face of it one could see value in the concept from a brand building, content distribution or a retargeting perspective, we may have to wait until if or when the results of this trial become clear before we can draw any meaningful conclusions.