As we celebrated our passion value, 14 people from across the agency  took centre stage in our latest Cocktail Club to talk about their big passions, and what makes them tick.

'Passion' is one of the core values at Stickyeyes and to celebrate that value, 14 brave souls from across the agency stepped up to the soapbox last week to talk about their big passions – with a £500 prize for the winner.

Compered by content editor Steve Clarkson, founder of #FoundFiction, with the help of our HR and social teams, we invited people from across the agency to stand up and talk about what they are passionate about. They all had just four minutes in which to do it, but what followed was an evening of martial arts demonstrations, a 101 on kite surfing, a hip-hop rap and an incredible kazoo ensemble.

The eventual winner, Joe Potter, went home with £500 to spend on his passion: hip hop. We hope to see you in the charts as a star rapper, Joe.

So, just what was it that gets our teams so passionate? 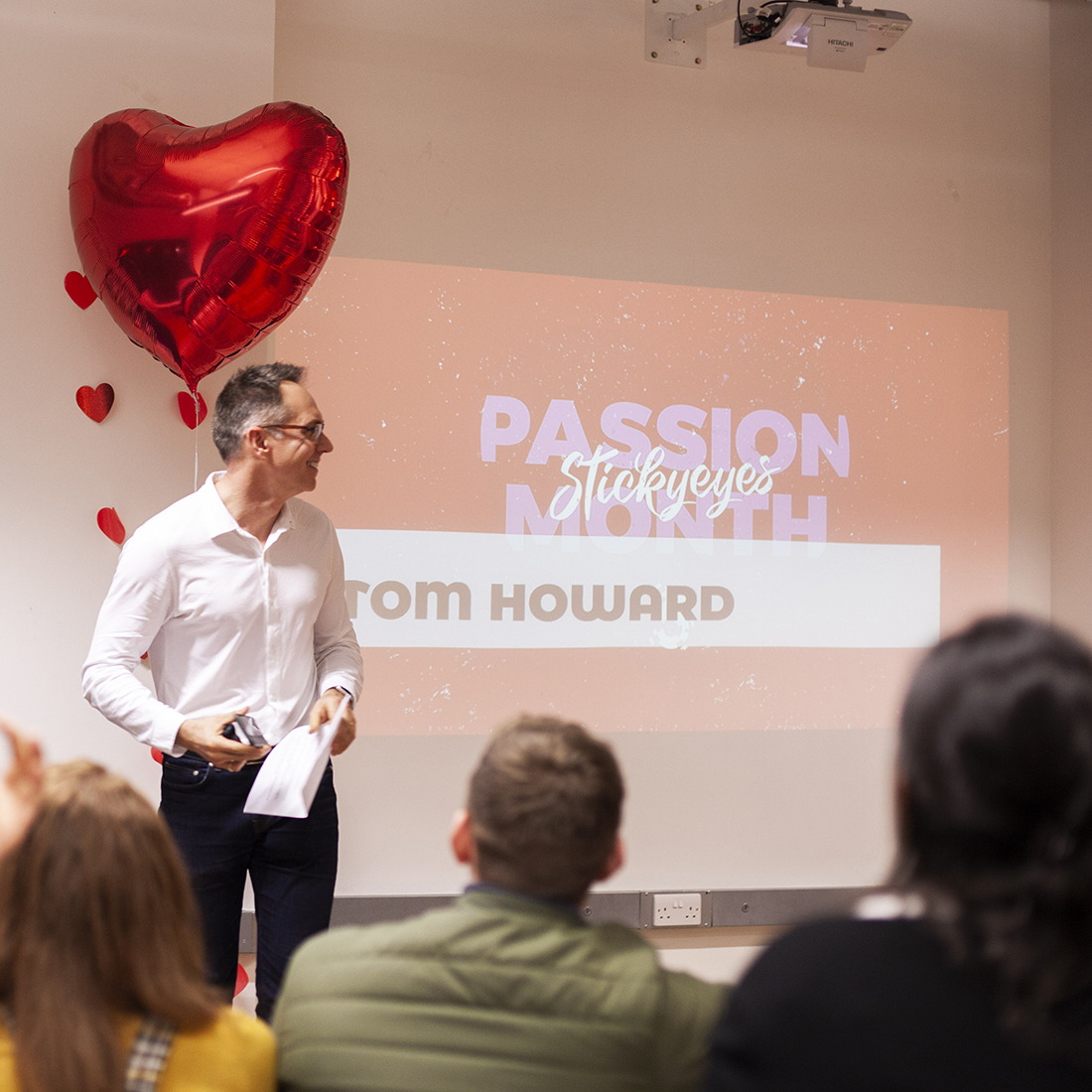 There were oohs and aahs across the room when Tom shared a video of him airborne a few metres above the Irish Sea. Tom’s an avid kite-surfer, and earlier this year circumnavigated a Scottish island for charity. 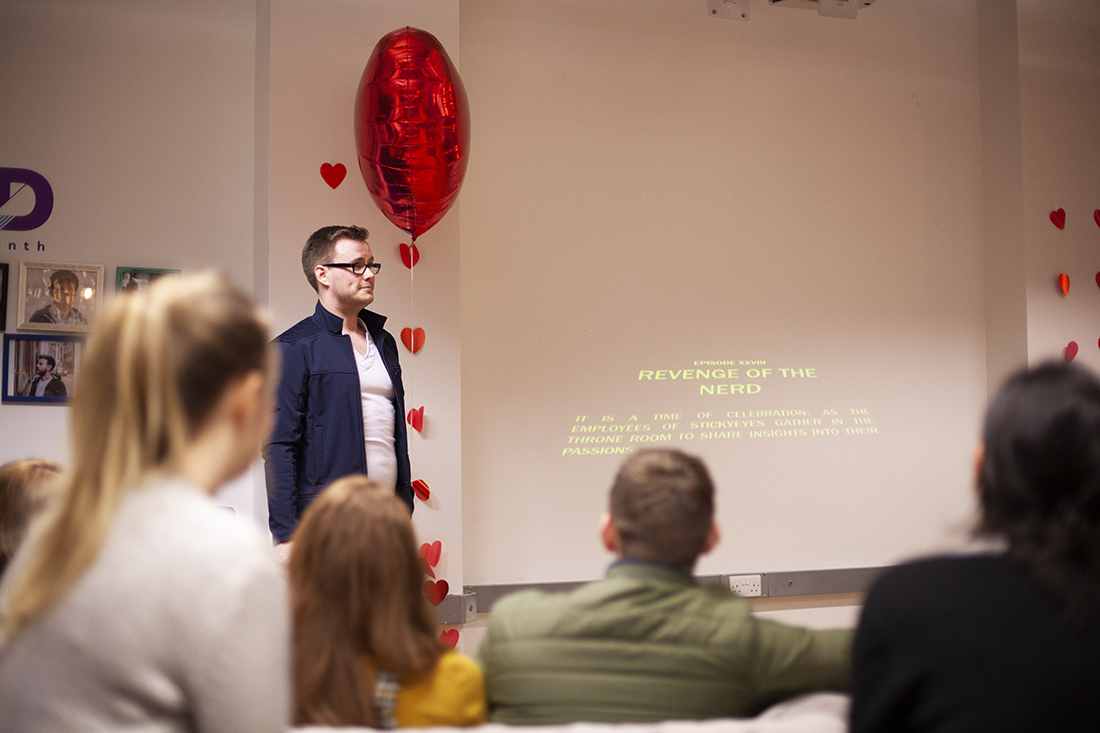 Josh is already the go-to hero for every new starter at Stickyeyes, but his status was confirmed when he appeared in his Han Solo garb, including Blaster Pistol – and to the backdrop of his own ‘A long time ago, in a galaxy far, far away’ opening sequence. 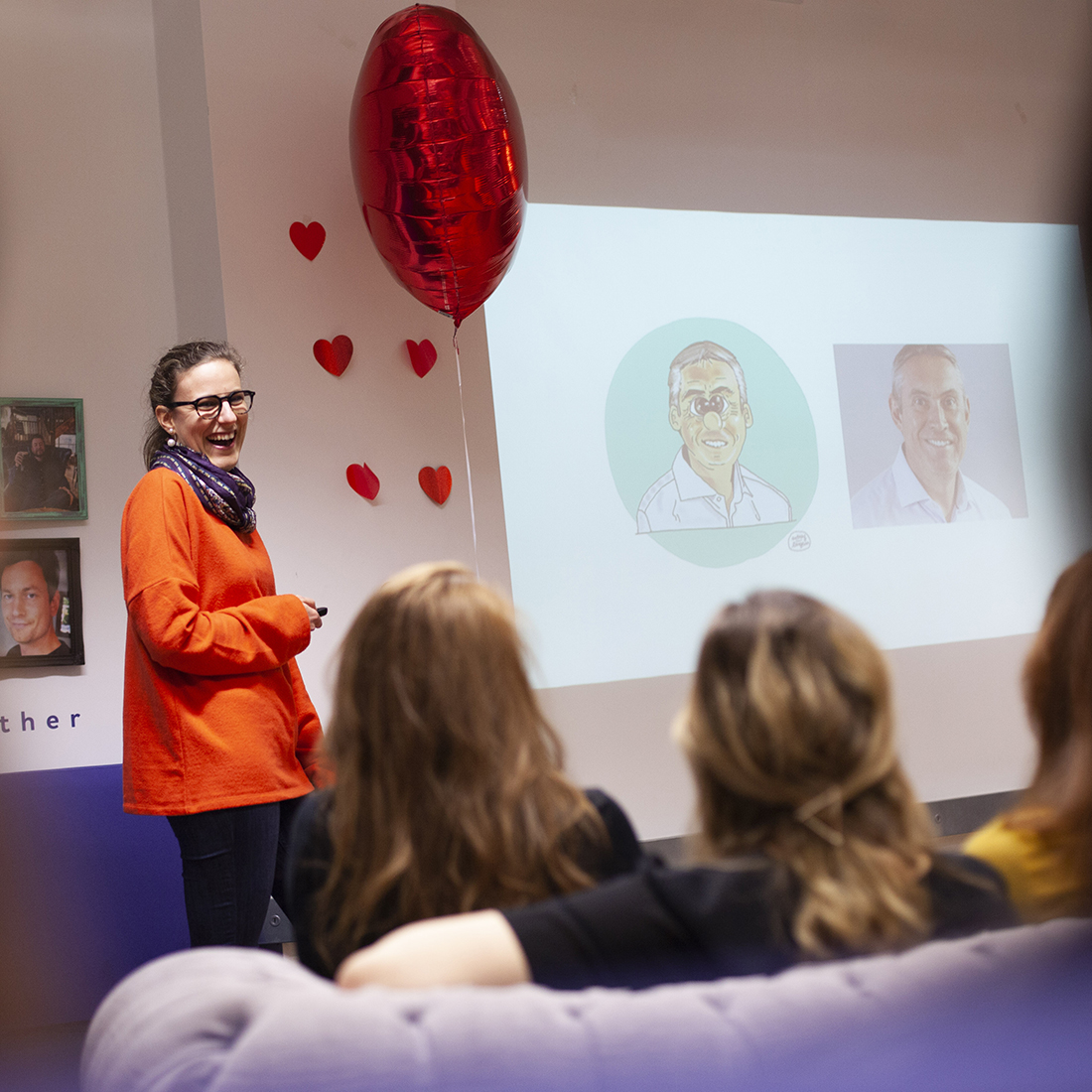 What started off as doodles about French and English idioms has turned into something much bigger for Audrey. Her caricatures had us all transfixed – especially her portrait of MD Phil Kissane. Have a look at her work on her Instagram page. 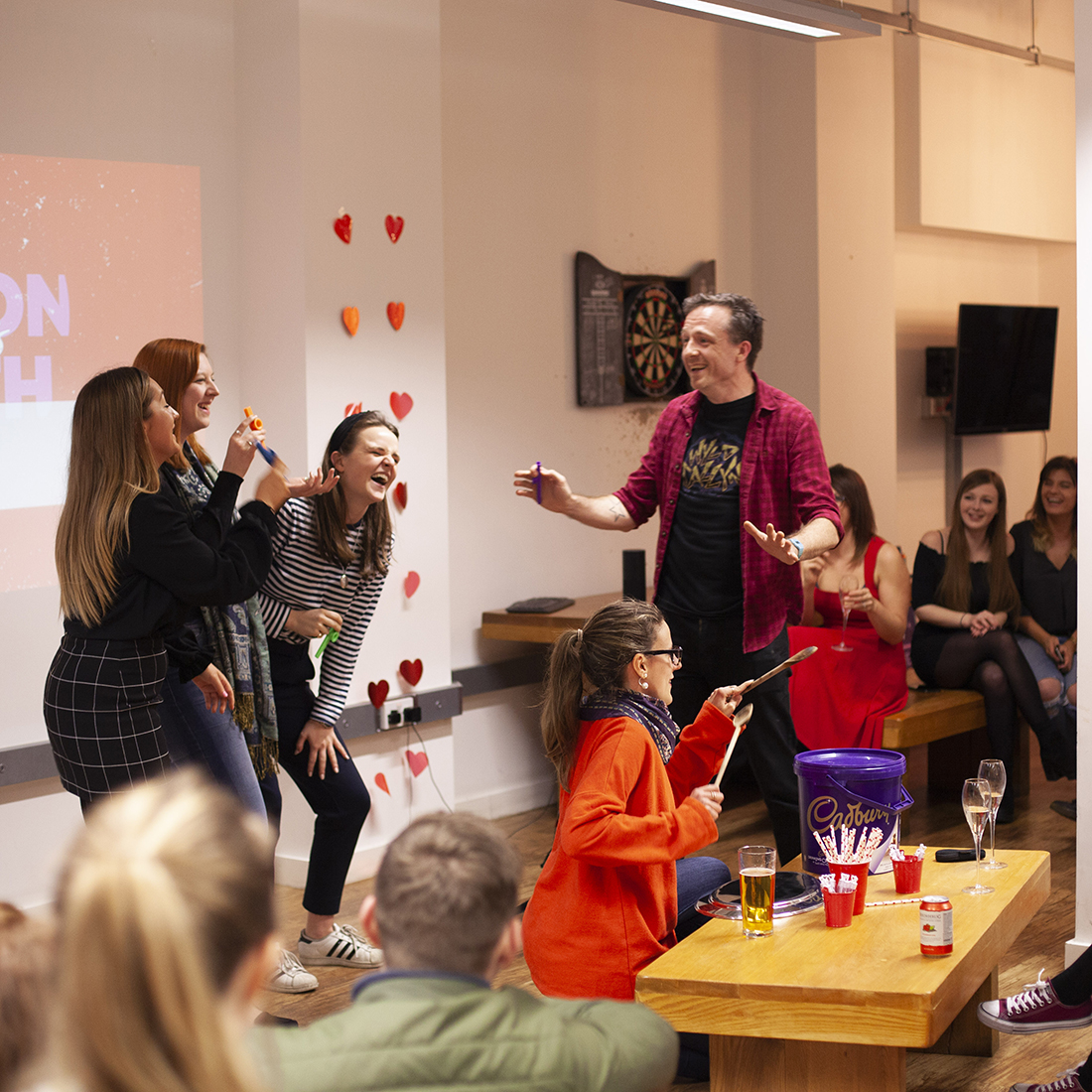 No one expected there to be a performance of American band Survivor’s hit track Eye of the Tiger – even less so performed on kazoos. But that’s exactly what we got from Sam Smyth (not to be confused with Sam Smith, who's also fairly musically-minded). 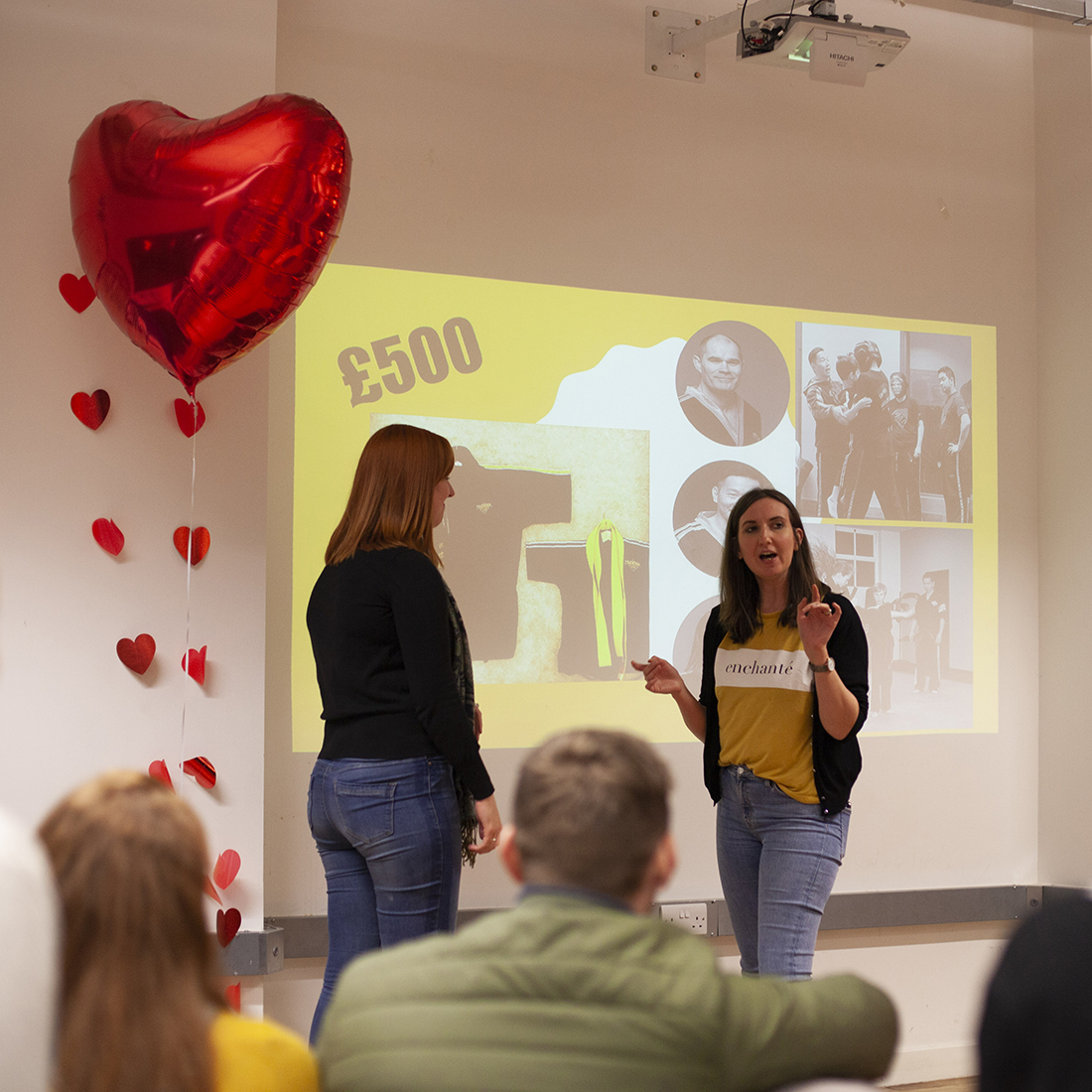 One to get the attention of HR, Katy’s demonstration of Krav Maga – a martial art created by Hungarian-Israeli Imi Lichtenfeld – had everyone on the edge of their seats. There were two lessons: 1) Krav Maga is great for defence. 2) Don’t mess with Katy. When Vincent tore off his wrestling vest/bin bag with a neck hole, we knew he meant business. A lifelong fan of wrestling, he set the scene for how the sport shaped his childhood and continues to spark his imaginative synapses today. 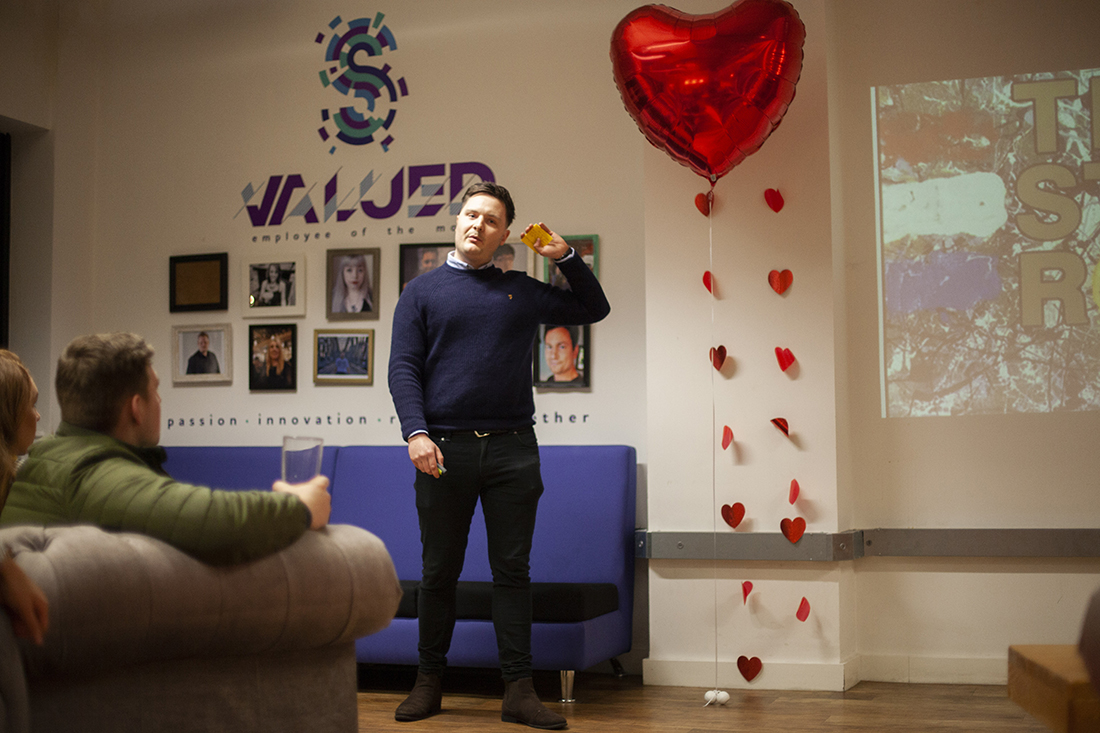 Jack started by saying he was going to talk about Little Mix – but soon changed tack to the Manchester rock band, The Stone Roses. They’ve been the soundtrack for Jack’s life so far, and one day he hopes to buy a signed vinyl for his dad. 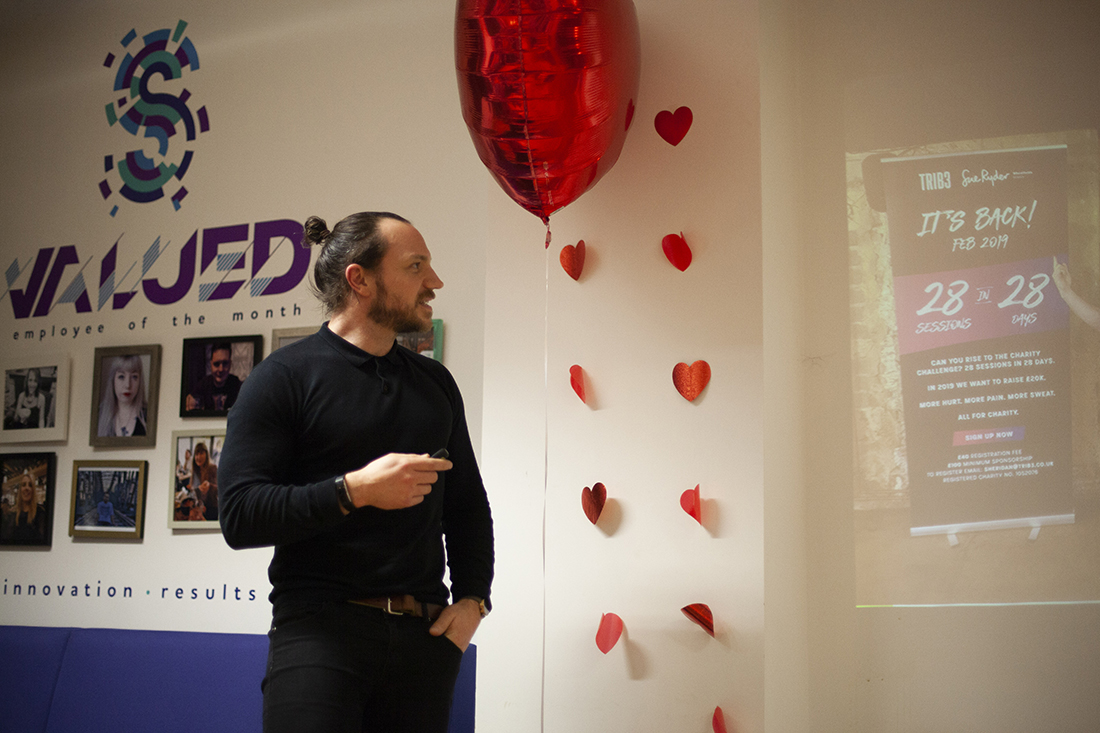 After Mike’s talk about snowboarding, everyone was clear about two things: snowboarding is an awful lot of fun, and it’s great for your quads and glutes (they’re muscles, by the way). Throughout February, Mike did 28 workouts in 28 days for Sue Ryder – you can still donate here. 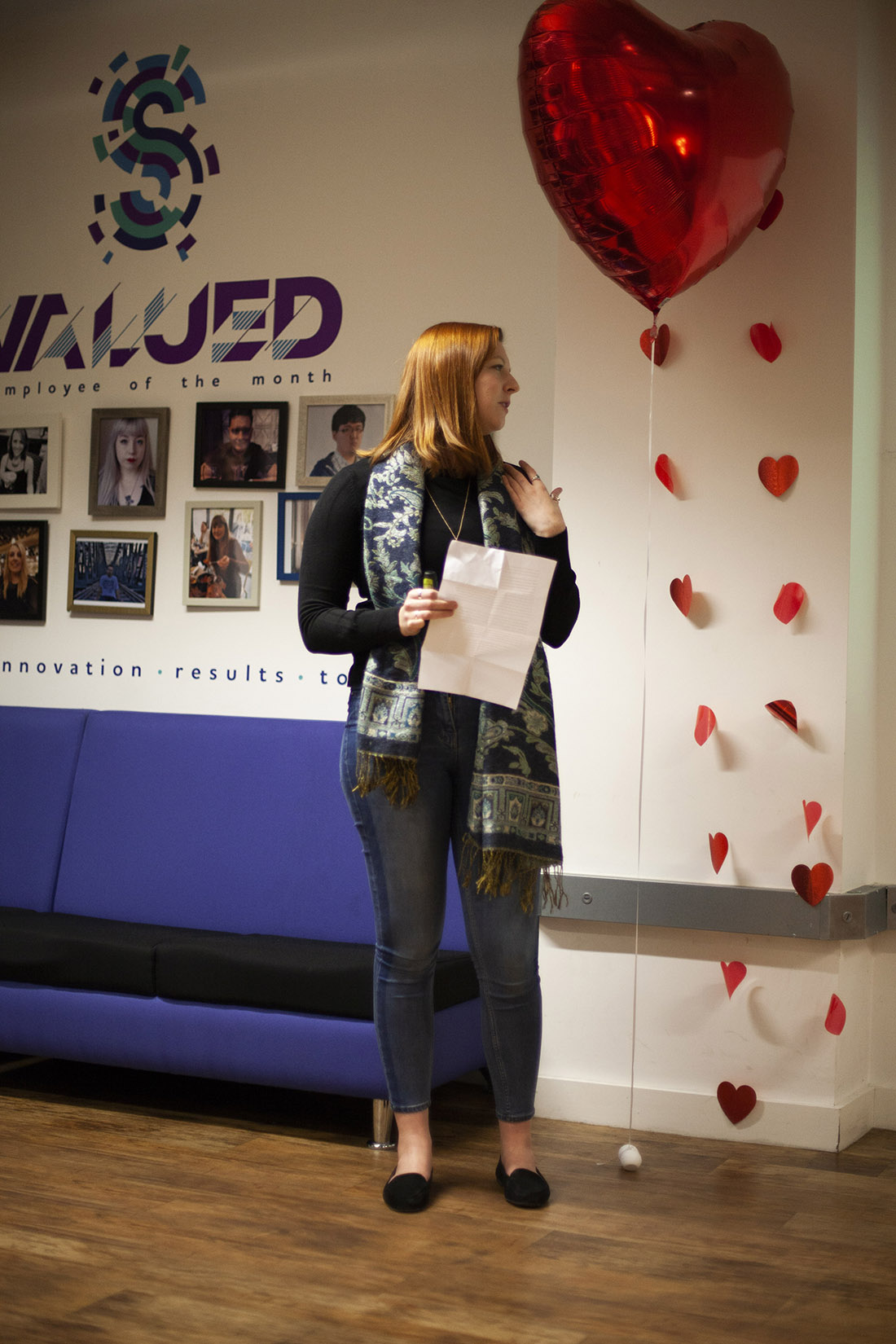 Everyone needs some escapism, and within a couple of minutes Hannah had whisked us all off into a world of fantasy, folklore and magic. Hannah’s currently working on her first novel – remember, we knew her before she was famous.

Seeta Wrightson, Content Strategist: JOMO: The joy of missing out 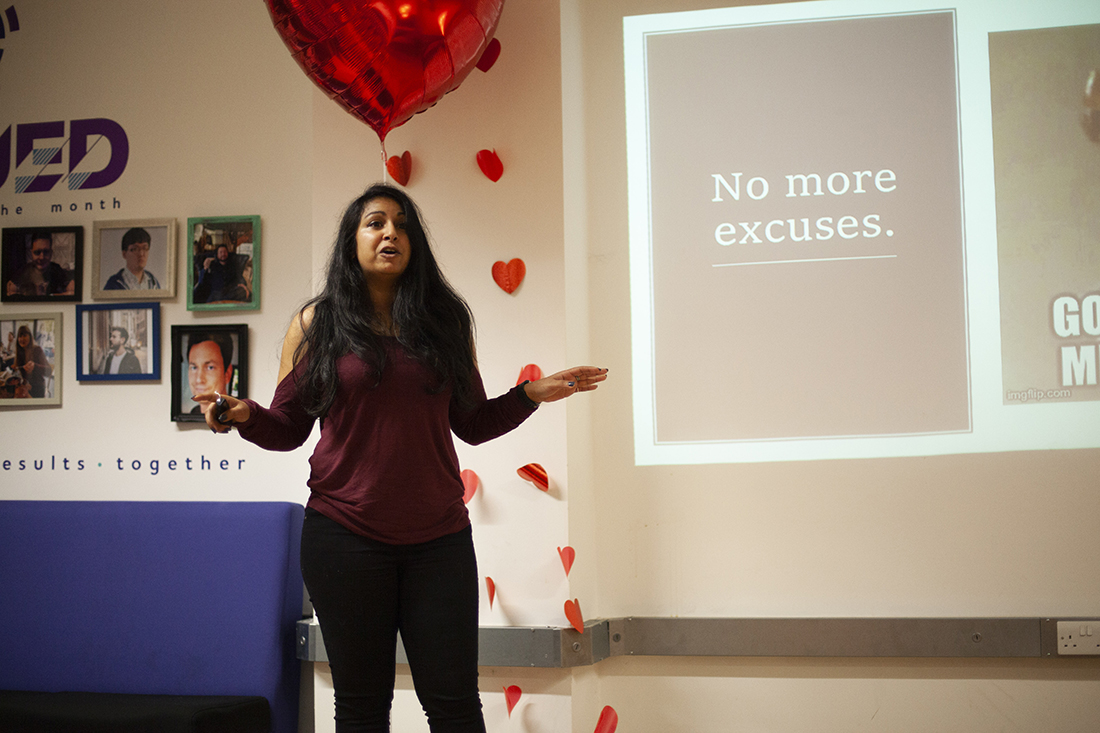 The antidote to FOMO (the fear of missing out), Seeta gave us JOMO. Yes, the joy of missing out. Eschew the stuff you can’t be bothered with, and just enjoy the things you like most, said Seeta. You’re not missing a night out – that brew in your hand is JOMO. 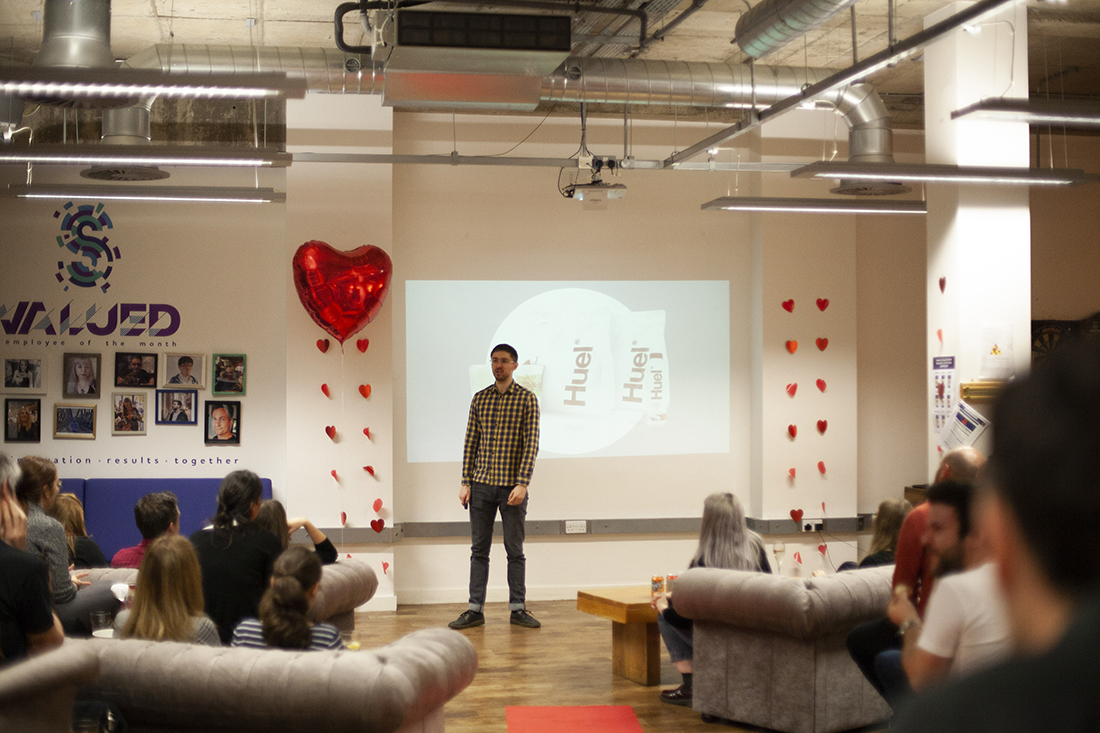 There was only one thing everyone wanted to hear from Jack; his deep love for Huel. More than a powdered food, Jack espoused Huel’s multitude of virtues – including the environmental benefits of going meat- and dairy-free. 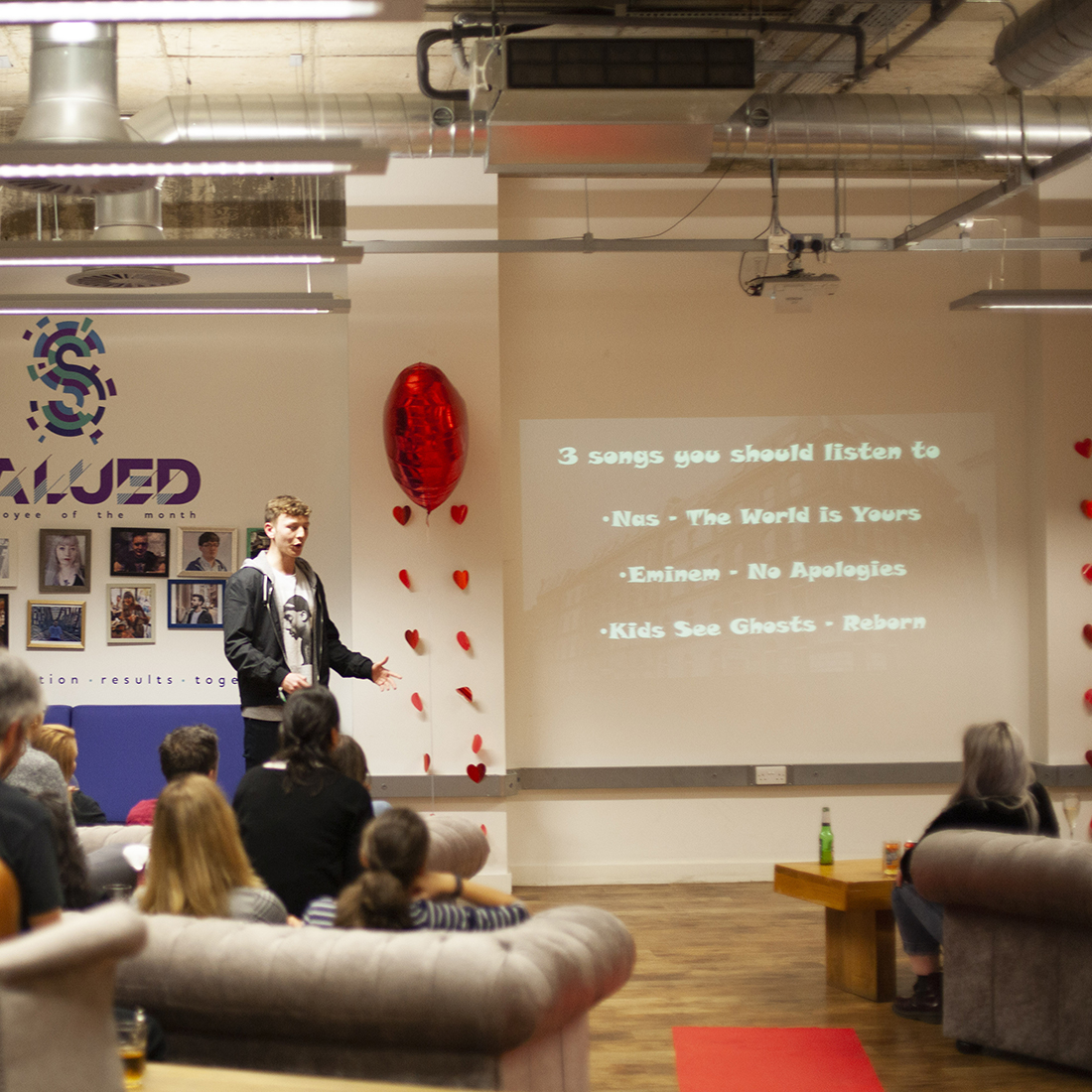 Our ultimate winner, hip-hop and rap means the world to Joe. It’s his release and his joy. With his £500 prize, he wants to invest in some decent kit to start recording his work and get his name known. We’re rooting for you, Joe. Over the past two years, Joe has gone from being an amateur to an avid climber. Noted for watching nothing but bouldering (low-height climbing without ropes) videos during his lunch hour, he treated us to some of videos of him climbing – and inevitably falling. 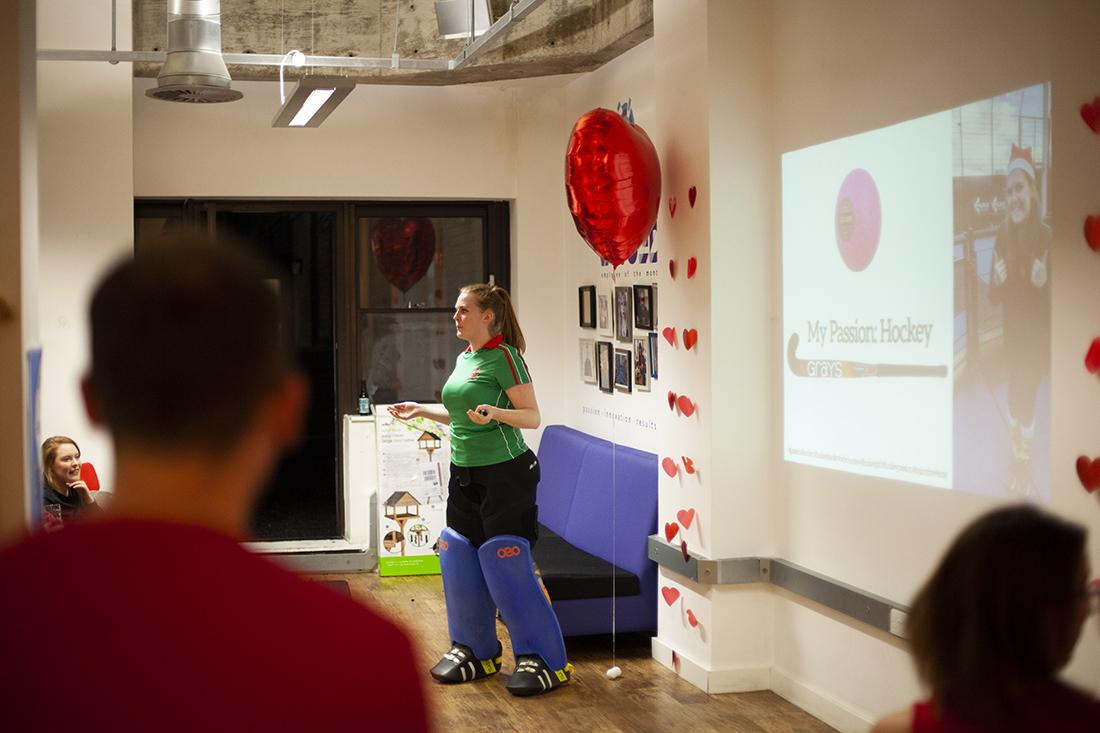 Fran’s love for hockey was palpable, as was everyone else’s fear for her safety. After showing us pictures of hockey players’ injuries – broken ankles and faces were the order of the day – we’re very glad Fran’s kit could rebut any attack, including a stern kick from Josh.