Home > Blog > We asked the Stickyeyes Creative team – Why do you write?

We asked the Stickyeyes Creative team – Why do you write? 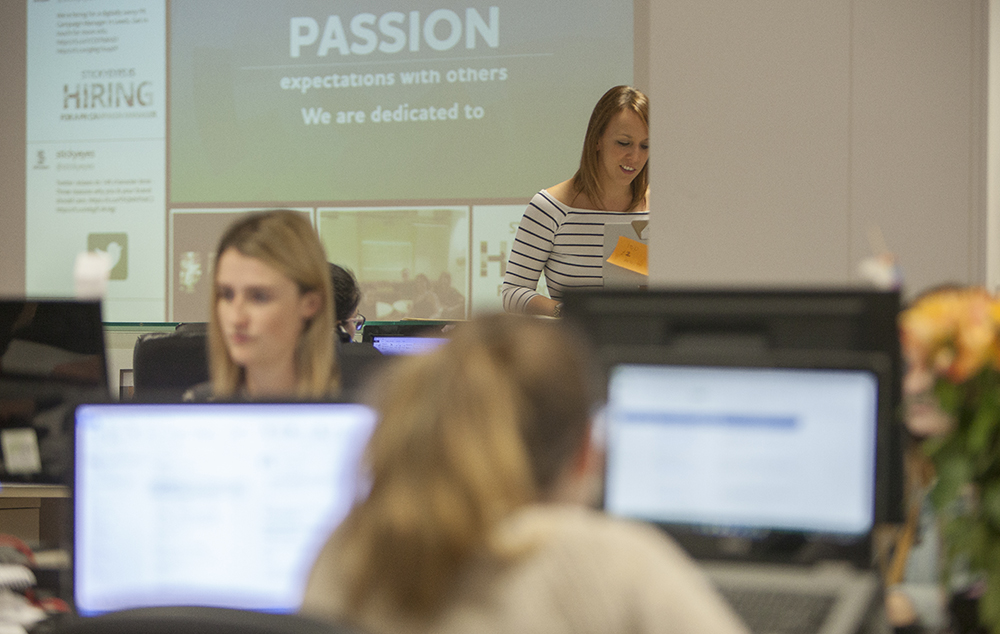 Here's what they said:

"I’ve always loved writing letters. It started in kindergarten with my friends, where we’d draw pictures and send them to each other. My two best friends lived in a different part of my hometown, so we’d send each other handwritten / drawn faxes every day for a long time. The anticipation while they were printing for about 10min was unreal! I still love sending written letters to my German friends today."

"At school I was wayward and rubbish at most things – hated maths, struggled with science, couldn’t draw for toffee. But when I was about 14 we were studying To Autumn by Keats. I wrote an (I imagine pretty cringey and cloying) homage to it that my English teacher really liked and from then on he got behind me as a mentor.

At uni in Liverpool I started writing for an underground fanzine – Mercy – and later for music and style magazines before getting into journalism and then content. Writing just felt right. Still does. When you’re writing and in full flow, it’s like you’re somewhere else completely. Bit of a natural high. Hard to explain."

"I started because it was an outlet for my feverish childhood imagination. I wrote a crappy book called Harold The Walking Stick when I was 7. Why did I decide to write about an anthropomorphic walking stick? Who knows… Now it’s more because I enjoy putting across ideas or facts in an interesting way I guess. Communication and all that! I also used to enjoy speaking my brains on all things TV, film and gaming – which I still do occasionally on social media."

"At 8-9 years old I discovered Word and started to type short stories inspired by my family, friends, life, movies and creativity. I also kept a journal. Today I write for blogging, and also for work and personal to-do lists."

"Inspired by the Goosebumps book series, I decided I wanted to be a writer when I was six years old. I never forget how privileged I am to be able to make a living as a writer today. I write because it's what I'm best at. It's also a means of therapy and a way to connect with people."

"I loved reading and, like Mark, had a very active imagination. I could spend hours on my own making up stories for my toys or pretending I was a character in one of my favourite books (what if Harry Potter had a long lost sister who believed she was a muggle…?).

It wasn’t until secondary school that I started to pursue writing. In fact, before then maths was my strong subject and English was fairly poor (I blame my spelling). I had to write a short story on the theme of motion (or something similar) and wrote a piece about the waves crashing on the harbour near where I lived. My teacher loved it and I thought "hey, maybe I could write a book one day which other people wished they were a part of?". I'm trying to finish a book and I'm currently at around 40,000 words in, but have been dreadful at writing as of late. Like Steve, I always wanted to go into the world of publishing to publish other people's work. I never thought I’d make a living out of my own writing."

"I just find it massively cathartic. Although, when I’m in the flow I do forget to have meals. For those interested, my nerd book has been official announced. Many meals were missed to write this."

"Same for me, very cathartic. As a kid I wrote ‘sitcom’ ‘scripts’ on my dad’s ancient PC, and Star Trek-inspired science fiction. Like others it was a way of expressing my overactive imagination. I had ideas faster than I could draw them, writing seemed easier. I wrote tons of notes about wrestling matches fought between my action figures to accompany the exciting action.

When it came time to make some career decisions, I didn’t even consider writing as a full-time job. But being able to reconnect with the same feelings of floods of ideas I used to command is pretty bloody invigorating, and I know I’m lucky to be able to make a living doing it."

"For me, it was my love of stories. I’m not even convinced I was a natural writer, as much as my parents liked to think I was. I had to work hard at it (and still do!). My A-Level Lit teacher even told me I shouldn’t bother doing Lit and creative writing at uni, as I wouldn’t do very well. I’d love to bump into her now and tell her what I do for a living.

I wanted to work hard at it because I loved writing, and I wanted to be one of those people who created worlds for others to enjoy.

Someone once quoted famous line to me: 'If you can’t find what you’re looking for on the bookshelf, write it.' That stuck with me ever since, so I decided to write my own book. Now, I get to enjoy writing my own story as well as write on different topics every day for a living."