Home > Blog > Content Marketing > If a picture is worth a thousand words, why are you still using words?

If a picture is worth a thousand words, why are you still using words?

For copywriters, the scene will be familiar. A brief lands on your desk and all of the pertinent details are there – the message, the audience, the tone – everything you need to start tapping away at your keyboard. Now it’s down to you. You have to decide the best way to transform the information in that brief into an engaging, meaningful piece of content that works.

However, your client or whoever it was that provided this brief will often be expecting one thing and one thing only – a Word document full of information, keywords and reinforced sales messages in text form. This emotional image of Andy Murray captured the hearts of a nation, when losing to Roger Federer in the Wimbledon Final.

There’s a habit, particularly in SEO, to assume that written copy is the default medium. After all, the web is full of written copy and, if it’s written, displayed and distributed effectively, it works.

But what if, for example, you’re tasked with showcasing a complex product, a complicated service or an in-depth topic that, even with some ruthless sub-editing, will still require walls and walls of text? In an age where 140 characters can be deemed too much for some attention spans, where content is now viewed on the four inch screen of a mobile phone and where we have the acronym “TL:DR”, how do you make sure that your copy doesn’t sit on some web space, unloved, unread and unfound?

Are you relying solely on words? The chances are that 80% of your effort is going to waste.

“Use a picture. It's worth a thousand words,” was the phrase that appeared on page 18 of the Syracuse Post Standard on 28 March 1911 – a quote attributed to the New York Journal-American editor, Arthur Brisbane. More than a century on, the question remains – if a picture is worth a thousand words, why on earth are we still using words, or at least, so many of them? Felix Baumgartner's jump was watched live by 8m on YouTube

That question will probably be met with gasps of horror from my fellow copywriters but let’s deal with some home truths. Web audiences don’t read; they scan. At best, only 28% of your words are being read by the average web user but realistically, it’s more like 20% (Harald Weinreich).

So the challenge for copywriters is to make their content more visual.

The core principles of content production remain, regardless of the medium. Your content has to know why it exists and who it exists for; otherwise it will merely join the ranks of truly horrendous corporate blogs, cringe worthy Youtube videos and tedious infographics. The only thing that is changing is the way in which you present it. You need to think of the style as well as the substance.

One of the biggest frustrations that many digital copywriters come up against is a brief that doesn’t consider the power of imagery or clever design. A request for photography is usually met “I’m sure we’ve got a library of royalty free images somewhere”. It’s a one-dimensional attitude that completely misses the needs of the audience.

Let the audience see your point.

To understand the absurdity of such thinking, imagine picking up your preferred newspaper on Saturday 28 July 2012, only to find just word after word describing Danny Boyle’s spectacular opening ceremony for the London Olympic games without a single photograph from the stadium. As a reader, you’d struggle to understand the atmosphere and the emotion of the previous night, the words would feel lost without context and you’d feel thoroughly short changed. Don't consider images to be secondary to your content:They're what your readers eyes will be drawn to.

The New York Times has demonstrated just how effective alternative forms of content presentation can be. NYTGraphics is a fantastic example of how alternative forms of content presentation, be it video, infographics or plain text, can bring your content to life. Keeping with the Olympic theme, their look back at the history gold medal winning times in the men’s 100m condensed 116 years of Olympic history into a thoroughly engaging and informative piece.

Mail Online is another classic case in point. Whatever you may feel about its editorial standpoint, the fact that 6.8m people visit every month (NRS) suggests that they’re doing something right. Amongst that ‘something’ is a huge reliance on photography that encourages users to keep scrolling below the fold. Presentation of content is becoming more and more crucial and if you are still subjecting your readers or customers to walls of uninspiring text, you’re not going to grab or keep their attention.  If your customers are coming to you with a problem, they want to see the solution straight away. If they have come for breaking news, they want an instant sense of the joy or the horror of what is unfolding.

In a world where every single one of us has a video camera in our pockets, your readers are demanding much more than the written word to tell your story. They’re impatient, they’re impulsive and, if you don’t meet their needs, they’ll have no qualms about leaving you for somebody who does. 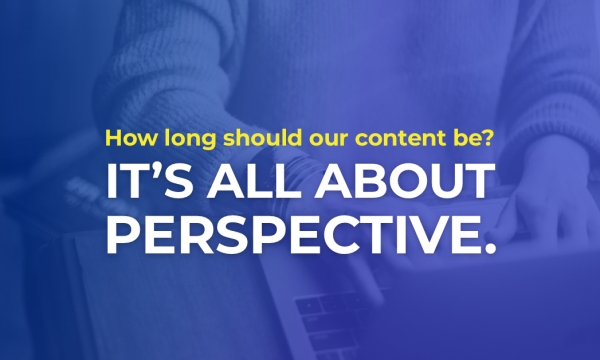 How long should our content be? It's all about perspective.

We hate to break it to you, there is no ideal content length. Except when there is, but even then, there isn’t really.