How to Manage a Social Media Crisis (Slideshare)

Our latest whitepaper, How to Manage a Social Media Crisis, gives you a easy to digest task list to help you prevent any potential crisis and minimise potential risks, prepare a reaction plan, respond, reflect, construct and counter any social activity and recover by understanding and addressing the problem cause.

But, we understand you sometimes don't want to sit down and read through an entire whitepaper so, we've created a handy Slideshare for you to peruse. Check out the slides and transcript below:

How to Manage a Social Media Crisis from Stickyeyes 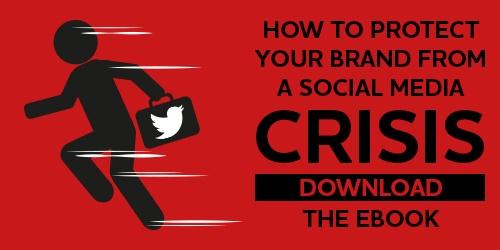 A social media crisis has the ability to overwhelm your brand, if this was to happen you need to act quickly, and ensure that normality is restored as efficiently as possible. Because if you don’t, it can cost your brand dearly.

Accenture reported that 66% of global consumers have stopped doing business with a brand due to poor customer service on social media. Hubspot have further highlighted this issue by suggesting that this may be down to an insufficient response time, with 50% of consumers expecting a reply in less than two hours.

So you need to have a plan in place to make sure that you know what a social media crisis is, be able to identify who is responsible for taking control of it, ensure that you know how to respond to it and to prevent one happening again (or in the first place).

But “crisis” is a strong word, so how do you define a social media crisis?

It will usually meet three conditions:

One: It will be a change from the norm.

Two: There will be a lack of control.

Three: It will have a material impact on the business.

When you experience a social media crisis, you need to go through four stages:

So why do so many brands get it so wrong?

1 - They don’t assess the risk of their campaign.

MasterCard tried to force journalists to tweet their promotion, but the journalists didn’t play ball. It was all very embarrassing #PricelessSurprises.

2 - They turn up when they’re not welcome.

DHL tried to send well-wishes to Jules Bianchi, but soliciting likes and shares is not the way to do it #ForzaJules.

3 - They don’t always understand the context of their post.

American Apparel wanted to celebrate thanksgiving with fireworks. They mistakenly used a photo of the Challenger disaster #BlameditOnTheIntern.

4 - They don’t acknowledge and address the problem.

5 - They don’t take control of the situation.

HMV was making huge redundancies in its marketing team. That same marketing team was in charge of the Twitter account #ChangeThePassword.

6 - They don’t recognise and embrace their brand’s flaws.

When a complaint about crisp packets was aimed at Ruffles, they acknowledged it and responded brilliantly. They defused the complaint and turned it into a positive #HotAir.

When a negative image about Greggs appeared on Google, it wasn’t a press release and angry lawyers that saved the day. It was humour, honesty and free donuts #FixGreggs.

When an Applebees waitress was fired, it caused a Twitter furore. The brand took too long to respond, and even took to replying to Facebook posts at 3:00am #NoPlanning.

When McDonalds was caught up in a meat sourcing scandal in China, their response was swift, effective to the point. Nothing more needed to be said #Effective.

So how should you respond if a social crisis unfolds?

Have your plan, and make sure that everybody, from the boardroom to the call centre, knows what it is.

Be aware of the threats to your brand. Monitor discussion across the web, not just your own channels.

Assess the severity of the problem. Over-reacting can be just as dangerous as under-reacting.

Be human. Humans can be humorous, empathetic, attentive, insightful and above all, forgiven. A carefully scripted statement is rarely any of these things.